You are here: Home » History of the Auchmar Estate » THE A. V. YOUNG ERA AT AUCHMAR » Chapter II – James Vernon “Bill”

James Vernon Young was born in 1891. He is the youngest child born to James Mason and Georgina A. Young and brother to Georgina Elsie, Annie Kathleen Douglas “Doug”, and Alan “Pete.”

Bob Young has given many interviews over the years as the self titled “Caretaker” of the Hamilton Tiger Cats Football Club.

In 2013, during Grey Cup Week, he spoke with Terry Jones of the Toronto Sun. The Tiger Cats would compete for the championship in the 101st Grey Cup Game. Conversation focussed upon the current team. 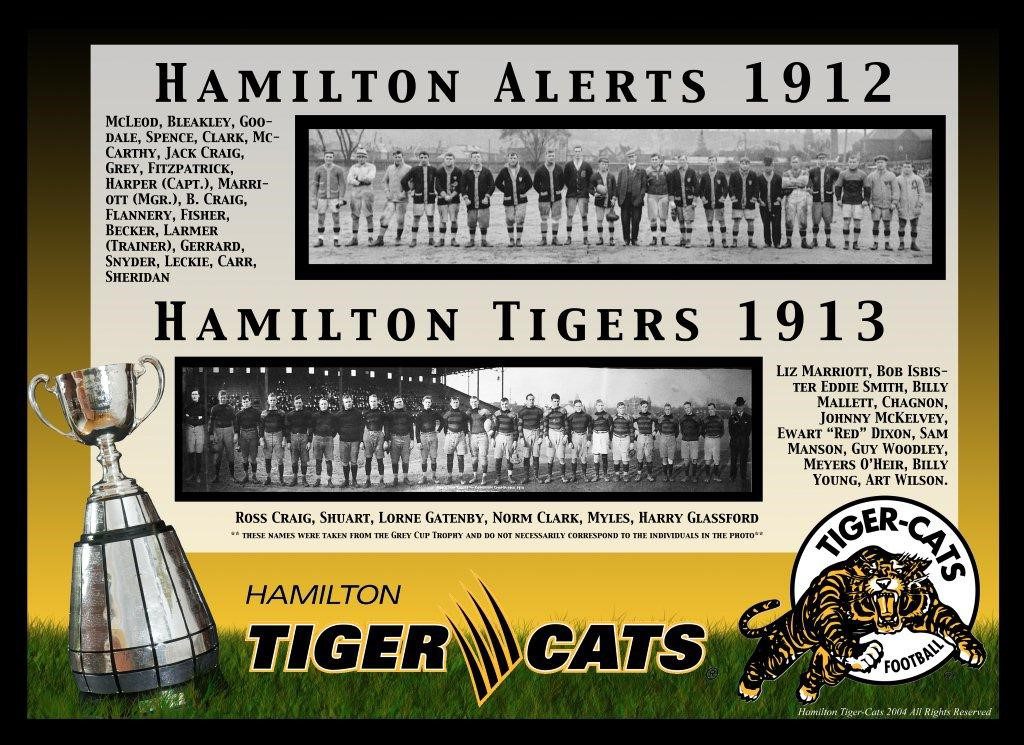 In 1913, the Hamilton Tigers defeated Toronto Parkdale 44-2 to win the cup. On that championship team was B. Young, Mr. Young explained. This player was his grandfather, James Vernon Young. He recalled his father (David Miller Young) telling stories about 1913 club and talking about his grandfather playing in the game.

Bob Young also gave insight into a habit within the family at the time. Within the family, brothers and sisters would be called by other names. Henceforth, his grandfather, James Vernon, was called “Bill” or “Billy” and his grand uncle Alan was called “Pete”.

Bob Young spoke about his Uncle Bill (William Holton Young) who served as a Director of the Hamilton Tiger Cats Football Club during the glory years of the 1950s and 1960s.

The 1913 Hamilton Tigers team picture lists the player names and positions. At the Fly position is Billy Young. The inscription on the Grey Cup reads B. Young. 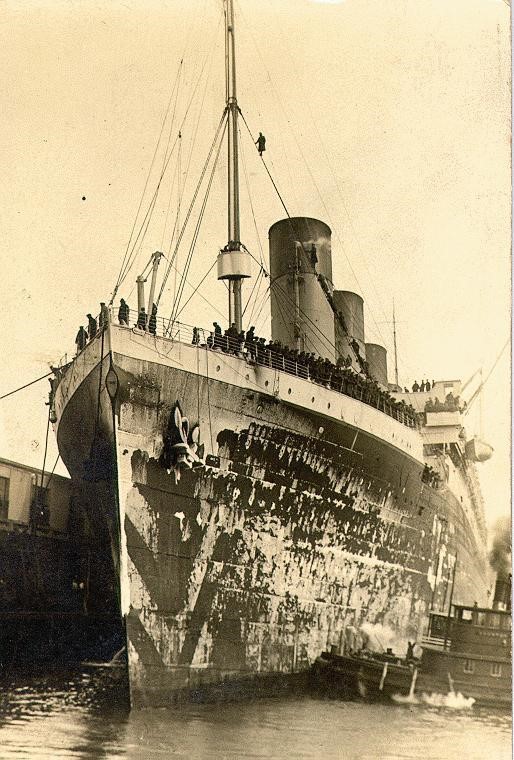 They boarded the ship; the wounded and battered, the ranks of decimated regiments, civilians, officers, sailors, crew, doctors and nursing staff. The lifts and cranes kept busy, loading supplies, coal, and cargo into the massive holds. Newspapers were read. Perhaps, the medical staff talked about the news making its’ way along the grapevine – blood transfusions.

James Vernon Young was on his way home. Perhaps, he chatted with fellow soldiers who had been recently at the front or he stood on deck with hundreds of others, taking in the vastness and depth of the Atlantic Ocean. Maybe, he went to the Marconi Room and cabled his family or wrote a letter. Possibly, the men on board, were able to look ahead a lit bit. For them, the fight was over.

His Majesty’s Transport Olympic, sister ship of the Titanic and Britannic, would sail from Liverpool en route to Halifax Harbour. It would make ten round trips between March and December of this year. Each homeward bound journey carried the spectre of enemy U Boats out on patrol. On each homeward journey, 5,000 – 6,000 soldiers and civilians called the ship home.

In his accommodations, James Vernon Young may have looked back over the last five years; the Royal Military College, the Hamilton Tigers, Massachusetts Institute of Technology, marriage, the Canadian Expeditionary Force, England, France and Belgium, being wounded, the Lusitania, the loss of his parents.

For some, this might have been enough to fill a lifetime.

By the end of the war, with the regiments returning home, H.M.T. Olympic would be known as “Old Reliable” to the Canadian troops.

He joined his brother, Alan, as an executive in the family business, The Hamilton Cotton Company.

The 1920s would see the company expand and issue a stock offering. J. V. and A.V. (as they would become known as) oversaw the merger of the Imperial Cotton Mills Ltd with a Yarmouth, Nova Scotia mill to create Cosmos Imperial Mills Company.

Mr. Walter S. Burrill, Secretary-Treasurer and Director of the Imperial Cotton Mills Limited was the architect of the merger.

The City of Hamilton Vernon’s Directory of 1926 lists James V. Young as Secretary-Treasurer of the Hamilton Cotton Company and gives his residence as Ancaster.

Mr. and Mrs. J.V. Young purchased Brockton Estate. A large wing was added to the west side of the home. During the ensuing decades, people would consider it one of Ancaster’s grandest homes. 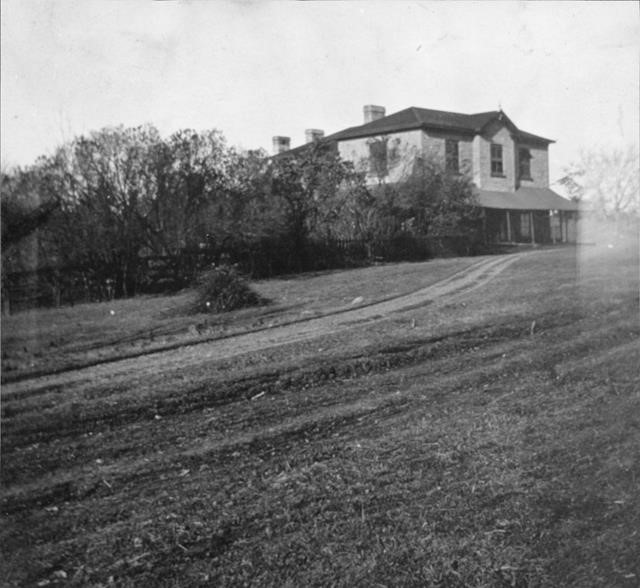 In 1926, James’ brother Alan, purchased the Buchanan family estate, Auchmar. Mr. F.F. Dalley, a friend and colleague of the Young family, moved into his new home Wynnstay Estate, which he had commissioned. It was situated on 100 acres of farmland.in Ancaster

James Vernon Young went about his business quietly and gave to many causes in Hamilton. The Annual Report of the Hamilton Sanatorium in 1926 lists Mr. J.V. Young as an associate member with voting privileges.

He served on the board of directors of the Dominion Belting Company. Other directorships included seats on the boards of Cosmos-Imperial Mills Co., Hamilton Bridge Company, and Canada Life Assurance Company.

The aftershocks of the stock market crash of 1929 rippled across the country. Companies let workers go. Everyone imagined it would last a few months, a year, maybe two at the most. Like others in the city, the Hamilton Cotton Company reduced its workforce as it kept going.

The City of Hamilton welcomed the world to the 1st British Empire Games in 1930. 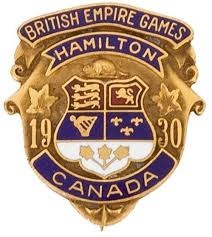 Mr. T.B. McQueston, a local lawyer and Member of the Legislative Assembly of Ontario, would make a significant contribution during this decade. He was Minister of Transport and the Chair of the Niagara Parks. He had a vision of beauty which was uncommon during these dreary years. He laid the foundations for the Royal Botanical Gardens, the Niagara Parkway and built the Q.E.W.

In the midst of the dreary years, Corbeil, a small town in Northern Ontario captured the world’s spotlight when news broke about the birth of the Dionne quintuplets.

The years brought change. Some families weathered the changes better than others. The Hamilton Cotton Company, though reducing its workforce, operated between 60% -80% capacity throughout the decade.

Their children, Doug, Bill, Georgina, who was known as “Babs”, David and Ben attended the Hillfield and Strathallan schools where they made lasting friendships and contributed to the life of the schools. The
pages of the yearbooks would chronicle their pursuits and activities. The 1934 editions of The Boar and The Priboch, the respective yearbooks of each school, recognized in memoriam, the contributions of Lady Gibson who passed away in January,1934. 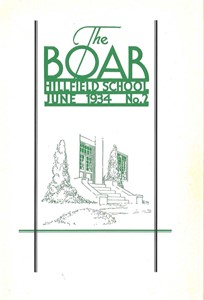 By 1935, diplomatic channels were observing events in Europe with a degree of concern. James V. Young’s friend, Lt. Col. H.D.G. Crerar, D.S.O. was stationed in England. He was a Canadian representative at the Imperial Defence College.

War Clouds loomed on the horizon. Some believed a diplomatic solution to Germany’s aggressive posturing was still possible. November 9, 1938, Kristallnacht, was a harbinger of things to come. Within the year, the nations of Europe and those of the British Empire, would send, the “Greatest Generation” onto the battlefields, the chilling seas, and up into the deadly skies.

Mr. C.D. Howe, Minister of Munitions and Supply, oversaw the creation of the 28 crown corporations as Canada’s industries converted from peace time to war time production. Everything was made: military transport, airplanes, ordnance, uniforms, small arms, cargo, munitions, tanks and ships. The Captains of Industry became “Dollar a Year” men, managing these corporations.

Mr. J.V. Young received a civilian appointment and the rank of Major General. He would work with Victor Sifton in Ottawa. They relocated to Ottawa.

James and Willmot’s children, Doug, Bill and Georgina “Babs” enlisted and wore uniforms of the services, as did Alan and Edna’s son, James. Their cousins, Mike, Bill, Owen and Charles, all enlisted.

In Hamilton, the Canadian Westinghouse Company small appliances plant converted to the manufacturing of anti aircraft guns and components for the Mosquito Bomber. By 1943, it was also producing components for the Lancaster heavy bomber. 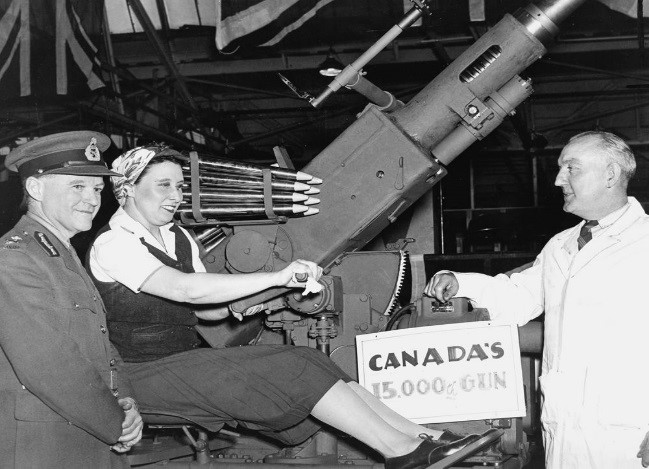 The Otis Fenton Elevator Company retooled within 14 weeks to become the largest manufacturer of the Bofors Anti Aircraft Guns in the British Empire. Major General J. V. Young would visit the plant as part of his duties.

It was a long six years with many letters written and sent home from various parts of Europe.

When the war finally ended, they all came home to welcoming families with the exception of Doug.

Doug was one of many Canadians involved in D. Day. He fell on Juno Beach. When the news reached Major General Young, he quickly relayed it to his son, Bill, who was with the R.C.A. on the Italian Front, and the rest of the family.

Major General H.D.G. Crerar arrived in Halifax Harbour in August 1945. He would settle in Ottawa and leave the service in 1946.

Mr. Sam Lawrence, Mayor of Hamilton, extended an invitation to Major General Crerar to visit the city. The city wished honour the major general with a civic ceremony and parade. Mr. Crerar accepted the invitation. While in Hamilton for the ceremony, he stayed with James V. and Willmot Young at their Ancaster home. 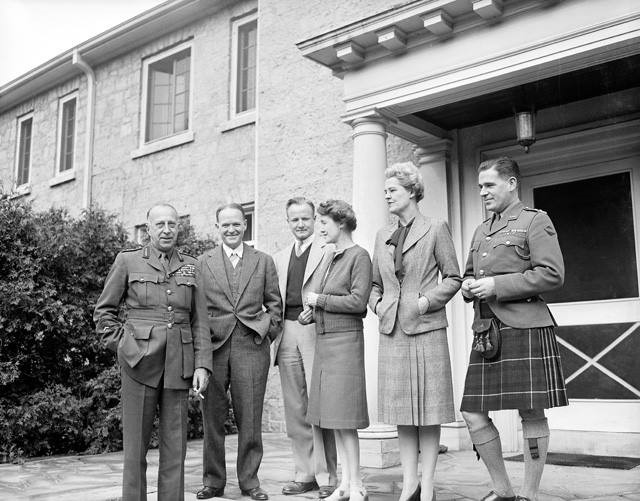 The veterans came home; disembarking from the ships at Halifax Harbour and taking the same trains home, which a few years earlier, had carried them towards the theatres of battle. Some stayed in the service, others didn’t They went on with their lives. They married their sweethearts, went to school, prepared themselves, bought homes and started families. For all that they had been through, these were welcomed years.

Major General J.V. Young, (Retired) was made a Companion of the Order of Bath.

He rejoined the Hamilton Cotton Company. Together, with Alan, they would transform the Dundas Cotton Mill from a storage facility to an operating textile mill which would employ many through the decade.

In 1954, the Hamilton Community Foundation was established through a Private Act in the Provincial Legislature of Ontario. The volunteer Executive Director was Mr. Cameron McGillivray. Mr. J.V. Young was member of the founding Board of Directors of the foundation, as was Mr. D’Arcy Argue Martin.

“My grandfather died quite young, in his early 60s. He was gassed in the first World War after he played with the Tigers. He had bad lungs because of what happened to him during the war……”. Bob Young recounted in conversation with Terry Jones.

In May 2005, a few years after the enormous success of Red Hat, and into the third year of ownership of the Tiger Cats, Bob Young was interviewed by Business Edge.

During the interview, he was asked “what was his fondest boyhood memory of Hamilton?”

“It’s the chocolate cupcakes that my grandmother (Willmot) housekeeper would cook and offer us after school. We lived next door to my grandmothers. I played sports, but I didn’t play any sports well. I come from a family of three boys and most of my cousins were boys, so you couldn’t grow up in that era without playing a lot of pick up baseball or touch football ……”

Major General James Vernon Young (Retired) passed away in 1961. He is interred with his wife Willmot, in the family plot in the Hamilton Cemetery.