What is a Dovecote?

Did you know that Auchmar has a Dovecote?
Built in 1855 along with the rest of Clairmont Park, the Dovecote sits on the east side of the property behind the coach house.
Some of you might be asking “what is a dovecote?” 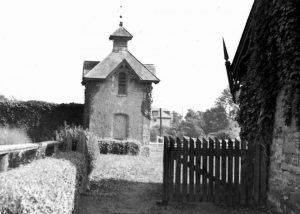 A dovecote is a structure intended to house pigeons or doves. Dovecotes may be free-standing structures in a variety of shapes, or built into the end of a house or barn. They generally contain pigeonholes for the birds to nest. Pigeons and doves were an important food source historically in Western Europe and were kept for their eggs, flesh, and dung. In some cultures, particularly Medieval Europe, the possession of a dovecote was a symbol of status and power.

Dovecotes were built by wealthy people to supply themselves and their households with a luxurious food, the tender meat of young pigeons. Dovecotes were always associated with a luxurious way of life they came to symbolize high social status – or high social aspirations. For this reason they were prominently situated, usually near the main entrance road to the house. 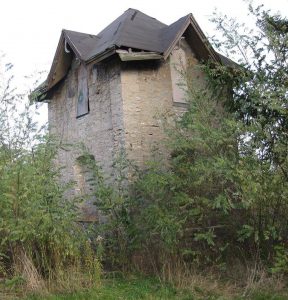 “Are not all dovecotes pretty much alike?” it may be asked. The answer to this question is emphatically “No.” It would be difficult to find two dovecotes quite identical in every detail, architectural style, shape, size, design of doorway, means of entrance for the inmates, number and arrangement of the nests. They were designed and built by craftsmen gifted with imagination, who, though they worked to some extent upon a pattern, loved to leave their individual mark upon the thing they fashioned with their hands.
The Dovecote at Auchmar is a very significant piece of our architectural heritage. It is one of only two Dovecotes that remain in Ontario. The other one is at Dundurn Castle.

Let’s not lose this architectural gem to decay and disrepair. – Let’s restore it to its former glory for future generations to explore and enjoy. 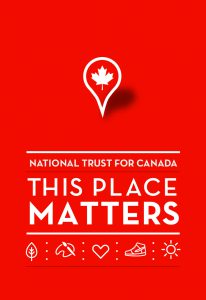 The Friends of Auchmar (FOA) submitted an application and was approved to take part in the 2017 THIS PLACE MATTERS Competition.
THIS PLACE MATTERS is the National Trust for Canada’s innovative crowdfunding competition that brings community members together to raise funds and awareness to save and renew beloved historic places, while generating community pride.

THIS PLACE MATTERS was launched in June 2015 with a competition themed on Nova Scotia’s lighthouses. Since then 64 communities have used this innovative crowdfunding website to raise over $725,000. What’s more, over 500,000 votes have been tallied and over one hundred media stories have reached millions of Canadians.
Canada’s first crowdfunding site dedicated to heritage.

The National Trust for Canada is a national charity that inspires and leads action to save places that matter. Our sites, projects and programs enhance community and quality of life and inspire Canadians to protect, renew and celebrate historic places for present and future generations.

About Our Save the Dovecote Project

Fly with us on a crowdfunding adventure to restore a truly rare architectural bird — the dovecote at Auchmar. People and organizations across Canada are rallying to restore Hamilton’s treasured Auchmar Estate — a 10-acre, publicly owned property built by The Honourable Isaac Buchanan in the 1850s. It features a host of distinctive elements, including a Victorian dovecote once used to house pigeons. Overall, this is a large, multi-year restoration initiative that has been divided into small, manageable projects. Friends of Auchmar volunteers — in partnership with the City of Hamilton, Heritage Hamilton Foundation, Environment Hamilton and many others — are currently fundraising for the makeover of the Auchmar dovecote. Picture a restored gothic revival, stone dovecote topped with pointed gables and a distinctive finial. The dovecote, one of two known to remain in Ontario, is a unique 19th century structure that must be saved for future generations. Our vision is to restore the dovecote and put it to new use as a focal point for gatherings, ceremonies and photography. Coupled with a community garden, the dovecote will be a signature ingredient of a fully restored Auchmar Estate that is open to the public and emblematic of Hamilton’s respect for its architectural heritage.

The dovecote project is important on its own. Yet it has a far more powerful meaning in the context of a larger story: the heritage restoration of the Auchmar Estate. When renewal work is complete in the coming years, the estate will be a major asset of local, regional and national significance. It is envisaged as the future home to several leading not-for-profit organizations committed to public service — including components of the storied Royal Hamilton Light Infantry (RHLI) — and a place for learning, recreation, dining and special events. Locally, the estate will be embraced as one of a few remaining heritage landmarks on Hamilton Mountain, a part of the city that has absorbed a large share of new growth over the years. In time, plans call for the Auchmar Estate to be connected to the neighbouring Century Manor Estate and Chedoke House to create a distinctive heritage precinct.