It is with deep sadness that we announce the untimely death of Larry Maughan on November 29, 2018. Beloved husband to Isobelle (Belle) for 45 years who predeceased him in 1999. Loving father to Kate (the Reverend Canon Keith). Awesome Grandpa to Sarah and Josh Morrison. Big brother to Michael Maughan (Judith, deceased). Will be fondly remembered by four nieces and nephews and six great-nieces and nephews. Active in the Bahá’í Fellowships of Hamilton and Guelph, strong supporter of all Bahá’í youth. Volunteer with the Friends of Auchmar, Hamilton; Waldie’s Blacksmith Shop, Milton and Westfield Heritage Village, Hamilton. Burial to take place on Tuesday, December 4 at 11:00 a.m. at Woodlawn Memorial Park (cemetery) 762 Woolwich St., Guelph. A Celebration of Life will be at Church of the Resurrection, Hamilton. Details forthcoming. In lieu of flowers, the family would appreciate donations to the Friends of Auchmar, Hamilton. 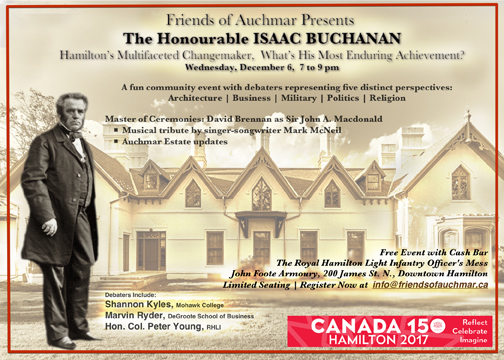 On October 26th The Friends of Auchmar will hold it’s Annual General Meeting. The meeting takes place on Thursday October 26th, 2017 from 7-9 pm. at the Terryberry Public Library (corner of West 5th and Mohawk Rd W.).

Speakers:
Robin McKee, who recently visited Europe on a tour with the Royal Hamilton Light Infantry will present a talk on the 100th anniversary of the Battle of Vimy Ridge and the 75th anniversary of the Dieppe Raid.
Richard Allen – on the Restore the Dovecote Campaign
Bill King – Buchanan of Auchmar
Carolyn Samko – Update on the Restoration work completed/planned for Auchmar

Attention FOA Members: Your Annual Membership is now due (except new members who joined after May 1, 2017).

Admission is FREE and is open to the general public as well as FOA Members
Everyone is welcome.
Donations gratefully accepted.

We have just published our Save the Dovecote promotional video on our Friends of Auchmar Youtube channel.